You are here: Home / OUR PARISH / St Columba’s Church / History

The Foundation Stone of St Columba’s church was laid on 6thSeptember 1964. Building work was completed in December the following year, and the church was officially opened on19th February 1966 by the Bishop of Shrewsbury.

The idea of a new church in this area had been taking shape since the late 1950s when housing clearance in the inner parts of Chester and developments in the suburbs made it clear that a new church would be needed. This was to be the third RC church to be built post-war in the Chester outskirts, following St Theresa’s in Blacon(1959)and St Clare’s in Lache(1960).This site was acquired from the City Council in 1959.

Prior to the opening of the church and setting up of the new parish, this area was served from St Werburgh’s Parish in central Chester, and it was the Parish Priest of St Werburgh’s, Fr (later Canon) Francis Murphy who was a key figure in the fund raising and commissioning processes–also in the dedication of the church to the Celtic saint, Columba. Thoughts about the design of the church coincided with the lead-up to the Second Vatican Council, with its profoundly influences on the church in the modern world, the approach to the liturgy of the Mass, the participation of the laity, etc. Such influences ran alongside new approaches in architecture and building techniques to generate a truly adventurous spirit in church design at that time. So it was in this spirit of adventure that Canon Murphy and the new Bishop of Shrewsbury, William Grasar, met in the summer of 1962 to discuss the design brief with the architect Francis Prichard.

This was the Liverpool firm’s first commission in Shrewsbury Diocese, though they had designed fourteen schools and three churches in the Liverpool area. It was a full 12 months before all the design and preparatory work was completed. The firm of Costains were selected as the main contractors in late autumn 1963.The chosen design has resulted in an impressively airy interior space, in which a congregation of more than 600 people can have a clear view of the altar. In the words of the architects: “Constructionally, the Church building consists of structural laminated timber portal frames on a reinforced concrete foundation, with a light weight  timber folded roof which rises to its maximum height of41ft above the Sanctuary area, surmounted by a pyramidal spire 52ft high. “The whole of this timber work is restrained by a reinforced concrete altar wall in the Sanctuary area, which is ornamentally pierced with small triangular openings glazed in ruby reds, deep blues and purples. ”Laminated cedar wood was used for the four portals, Douglas fir pine linings for the ceilings and Columbian pine boarding for the doors. Considerable care was taken over the choice of fittings and furniture.

Welcome to our Parish 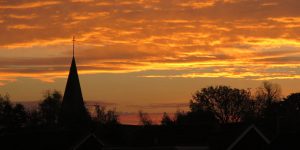 If  you need to get in touch with someone in the parish this is the place to start. Click this link to see our list of contacts.

If you need to find the mass times for any of the churches. You can visit their respective pages. you can find all of our mass times on the services page. You can follow the link to the location you would like to attend.

If you would like to locate the latest newsletter then please navigate to the News and Events Page.

For those Parishioners who normally give in the collection at Mass and wish to help our Parish at this time of restricted opening, the Online Giving page gives you a way to do this.